When searching for the ideal running headtorch, its performance is of paramount importance. Whether it be running rough mountain trails at night or running through a dark park, a good headlamp can be the difference between making it and not. Weight, durability, brightness, cost, comfort and stability are key factors.

Training on shorter winter days through the dark and cold, can shut down even the most ambitious runners. Head torches are invaluable and a decent headtorch can help you maintain fitness through winter. Making sure you don’t get lost when you’re running in the dark with this selection of the best running head torches.

The Petzl NAO+ is considered to be one of the brightest headlamps on the market. It has a lumen output of 750, has a smartphone app with builtin settings and has a new built in reactive lighting technology feature.

Before you try to find a good deal on this headlamp, please note that there are two versions of the Petzl NAO+. The older version only has 355 lumen, while the one mentioned here has almost twice the output and also a better battery life.

The new version comes with a rechargeable lithium-ion battery, rated at 2600mAh, charging time is about five hours.

The reactive lighting on the Petzl NAO+ is an amazing feature that you’ll either love or hate. For people running in relatively dark terrains, this would work perfectly as it adapts infrequently. It can be annoying for urban runners owing to the reflections on street signs and shop windows.

This headlamp is widely described as very stable and comfortable when worn. A lot of poorly designed headlamps bounce around when worn on the head, this is never the case with the Petzl NAO+ headlamp. This is mainly because the weight is evenly distributed across the head with the headlamp in the front and battery pack in the back.

The Nitecore HC33 head flashlight offers a unique L-shaped design. This design allows the light to be used as a handheld light when it is removed from its head strap. The light produces a flood style beam with a 100-degree angle. When used with the head strap the light can be adjusted 180 degrees.  The magnetic tail cap and removable pocket clip allow the Nitecore HC33 to be hands-free. The light uses a single push button located on top of the head and is used to power the light and cycle through the various modes. With the Nitecore HC33 users have the choice of five main brightness levels, plus a SOS, strobe, and beacon mode.

Petzl are known for their high quality outdoor equipment, they’re especially popular within the climbing community with all of their fancy gear. So when they release a new bright headlamp you can be assured it’s going to be a good one. This is the most expensive headlamp on our list, but it’s also one of the best out there. Whether you’re a runner, climber or an explorer, there’s little to dislike about this bright headlamp from Petzl.

The Petzl Ultra Rush Headlamp is rated at 760 lumen that is really powerful for a headlamp of this size. It features four constant lightning modes, meaning the headlamp will constantly shine until switched off. Depending on which mode used, it’s possible to achieve up to 38 hours of light with the Petzl Ultra Rush headlamp.

The Ultra Rush head flashlight uses Petzl own battery, called the Accu 2 Ultra. These batteries have aplastic enclosure and are specifically made for headlamps and will last you a long time.

That protects the battery. It’s also waterproof down to 1 meter, but keep in mind it’s only rated to be underwater for 30 minutes or less. In other words, don’t go diving with this strapped to your head, but it sufficient for a run on a rainy day.

The weight is distributed evenly across your head thanks to the battery being in the back and the headlamp in the front. It’s also pretty light, sitting at 370 grams.

The Olight H2R headtorch can be used as a headlamp or a pack strap in addition to a pocket light as it is able to detach from the head strap mount and comes with a removable pocket clip. Operating the Olight H2R is done via a side switch that is slightly angled for a more natural operation. The Olight H2R is fully rechargeable via the magnetic tail cap and magnetic charging cable.

The Mifine LED headlamp comes with three different light modes, High Light, Strobe and Low Light. Its CREE XM-L T6 LED is rated of a brightness level at 1200 lumens. This is a basic headlamp that ticks all the boxes without setting the world alight.

The Mifine LED headlamp has the pull/push zoom which makes it super handy to change focus. It’s also possible to tilt the lens 90 degrees downward. Like many other headlamps, this is a portable one and with its aluminium alloy construction is actually pretty durable.

This headlamp not only suitable for those who love outdoor sports and running, but also is ideal for lovers of outdoor recreational activities such as hunting, hiking, biking, camping, cycling, caving, and climbing.

This head flashlight, the XEO19R from LEDLenser is probably the most versatile headlamps on this list, giving a lot of LED torches a run for their money.

With the full 2000 lumens likely to be complete overkill in many situations, LED Lenser has equipped the XEO19R headlamp with no fewer than six different Smart Light Technology functions: ‘Boost, Low Power, Power, Optisense (automatic dim), Strobe and the innovative Emergency option, which can give up to 400 hours of ‘Firefly’ light.’

Asides from being an ideal running headlamp, it can also be utilised as a super-bright hand-held flashlight or mounted to a bike either as a bar or helmet light. As a bonus, you can also use the rechargeable battery pack as a back-up charger for any USB-powered devices you have, which is a neat touch.

Where it gets interesting is that you can not only use the light as straight headtorch with the 4 x 18650 L-ion rechargeable battery power box sat on the rear of the headband, but an extension cord and Neoprene pouch supplied mean you can use the battery remotely to reduce weight on the head and work better in cold conditions.

Other features include water resistance to IPX6 levels – resistant to a continuous spray of water for at least 3 minutes – and a secure lock-off switch.

Burn times are actually quite impressive: some four hours claimed for the 2000 lumen boost mode, eight hours on ‘Power’ and some 20 hours on low. To put that in perspective, claimed range is still a colossal 200m from the 1000-lumen output on power and even on ‘low’ it still delivers 200 lumens and 70 metres odd, which gives the light serious endurance racing potential

LED Lenser is made based on respected German technology and has earned a hard-earned reputation as one of the go-to brands for serious runners. The serious output levels and power options mean that it could easily substitute as a multi-sport light for a combination of running, biking, walking and even climbing. 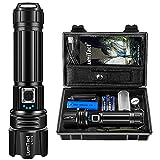 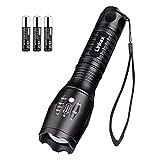